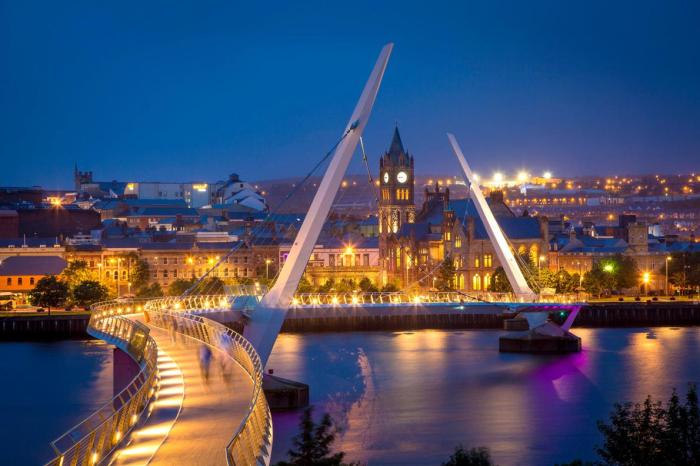 Northern Ireland blends centuries of history with an engaging modern vibe that shows time definitely hasn’t stood still. Mix in welcoming smiles and jaw-dropping vistas, and it all adds up to ten travel experiences that simply can’t be had anywhere else.

ROCK OUT IN BELFAST

Belfast boasts a proud musical history and the beat shows no signs of slowing down. Modern bands that more than do their elders justice are on tap nightly at clubs and pubs all across town. The Oh Yeah Music Centre’s Belfast Music Exhibition proudly showcases memories and memorabilia of artists from Van Morrison to Snow Patrol. Take to the streets for a guided bus tour of musical Belfast including Ulster Hall, where Led Zeppelin first performed “Stairway to Heaven,” and “Van the Man’s” childhood home. Then dance the night away with an array of talented local musicians that you may not know yet, but will never forget. Culture Northern Ireland has the skinny on performers and shows from folk, rock, and reggae to techno and classical recitals.

TAKE A PASSAGE ON THE TITANIC

Arguably the world’s most famous ship was born right here in the Belfast shipyards. (“She was fine when she left here,” some locals like to say.) Titanic Belfast is an engaging exhibition of reconstructions, special effects, and interactive features that help you experience the Titanic journey from the docks, to the decks, and even to the bottom of the Atlantic. Continue the adventure on a boat tour around Belfast harbor for a different perspective on Titanic history and the entire port of Belfast. During summer months, the city’s large breeding seal colony, often appear over the bow.

The Causeway Coastal Route is world-renowned. There’s a good reason—those who soak in this road’s dramatic seaside vistas and emerald glens can’t stop singing their praises. Stop at the ruined Dunluce Castle, perched on an ocean cliff so precipitous that the castle’s kitchens dropped into the sea one night in 1639. Test your head for heights by walking the Carrick-a-Rede Rope Bridge above the waves from clifftop to island and back. And marvel at the Giant’s Causeway, a 50-60-million-year-old pile of basalt columns, stretching into the sea, that has inspired awe and legends in equal measure throughout the long centuries of Irish history. When the day is done wet your whistle at another famed attraction. Take a tour of the Old Bushmills Distillery, the oldest working distillery in Ireland, to get a behind the scenes look at small-batch whiskey production and sample a smooth dram for yourself. 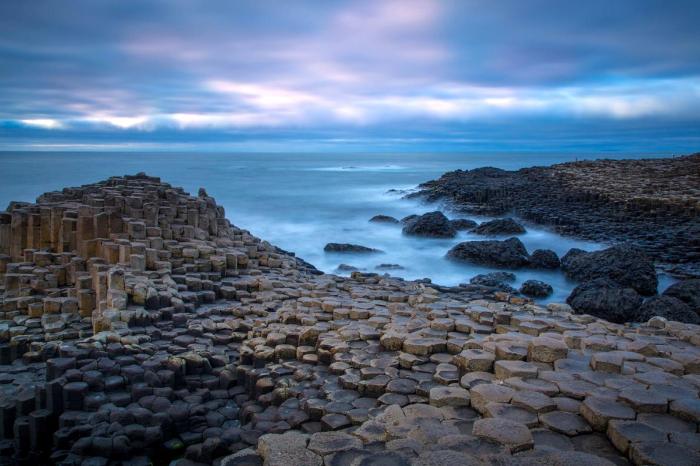 WALK THE WALLS OF LONDONDERRY (DERRY)

Northern Ireland’s second city is vibrant, modern urban center with one of Europe’s youngest populations. But its heart is cloaked in 17th-century stone, an enduring engineering marvel of the age. Nearly a mile of stone walls, built between 1613-1618, encircle inner Londonderry (Derry) and provide a pleasant stroll around one of Europe’s very finest surviving walled cities. The ramparts are studded with seven gates and one of the continent’s greatest collection of cannons including Roaring Meg—famed for the terrifying sound she unleashed during the 1689 Siege. (The city never fell.) Learn more about the city’s fascinating history at the Tower Museum. Displays here include items salvaged from La Trinidad Valencera, which was one of the biggest ships in the ill-fated 1588 Spanish Armada before it came to grief just offshore.

The real world Westeros features landscapes every bit as striking and unforgettable as those seen in Game of Thrones—and you can enjoy them without fear of being beheaded. Visit spectacular sites from the show scattered around Northern Ireland on your own, or on specialized tours catering to fans of the Starks and Lannisters—some including choose-your-own costumes, bonfires, and feasts fit for a king. Visit the Winterfell film set at Castle Ward and try your hand at archery or meet the Direwolves Odin and Thor. Stroll the Dark Hedges, an avenue of 18th century beech trees more familiar to fans as the King’s Road. If you dare, head north of the Wall into the Haunted Forest itself with a visit to Tollymore Forest Park. Tourism Ireland has painstakingly mapped the Seven Kingdoms to help fans plan their own quasi-medieval fantasy trips.

With four major championships and counting, Rory McIlroy has raised Northern Ireland’s game in the golf world. You might not be able to play like Rory, but at least you can enjoy a round on the same courses he loves. Northern Ireland is home to some of the world’s best links courses and you’re welcome to play them even if your game isn’t quite world class. Royal County Down is a private club, but visitors are welcome to play the Championship Links (if reserved well in advance) several days a week. Royal Portrush Golf Club, which will be home to the 148th Open in 2019, also welcomes advance reservations from members of other recognized golf clubs. Although these two institutions enjoy global fame, don’t overlook a local favorite and Rory’s home club. Holywood Golf Club offers even duffers a scenic round set in the hills just a few miles outside of Belfast.

TAKE A HIKE TO HARE’S GAP

Some of the most rugged and inspiring scenery in the Mourne Mountains is found on the hike through Hare’s Gap, a moderately taxing jaunt of about 2 miles each way. As you climb to the pass imagine the ice sheets that once helped shape this range, and glimpse the inspiration for Belfast-native C.S. Lewis’s land of Narnia. Spare a thought for the smugglers as well. The gap was once a gateway for smuggled spices, coffee and other goods that were carried here from the coast along the Brandy Pad route for distribution into the Trassey River valley below.

For a more leisurely loop try the circular ridge trail around the top of Divis and the Black Mountain just outside Belfast. The moderate trail takes around three hours, and, on a clear day, it delivers incredible views of Scotland and the Isle of Man.

Marble Arch Caves Global Geopark is a celebrated UNESCO site that shows off 895 million years of Earth’s history both above ground and below. Today the landscape surrounding Cuilcagh Mountain is an appealing one of uplands, lakes and forests. But over the eons it has seen mountains rise and fall, deserts, and even tropical oceans. You can read these ancient stories in the enduring rock, thanks to surprises like the coral fossils found on the slopes of Cuilcagh Mountain. Below the surface an entirely different world awaits. Vast caverns, running rivers, waterfalls, and fascinating geological features are on display in Marble Arch Caves, one of the finest European caves open to the public. From March to October, take a 75-minute tour through this subterranean wonderland by boarding an underground boat ride that leads to a mile-long guided walk through and out of the cave.

EXILE YOURSELF ON RATHLIN ISLAND

Robert the Bruce is said to have been exiled on Northern Ireland’s northernmost speck of land in 1306. Once you visit Rathlin Island you’ll be tempted to linger voluntarily. So get away from it all. Take the local ferry from Ballycastle, which takes 25 to 45 minutes. Some 150 friendly locals call the island home, and their quaint port village soon gives way to quiet country best explored by walking or by bicycle, which can be rented on the island. Stunning vistas blend land, sea and sky. Many interesting birds call the island home, at least seasonally, including a colony of puffins. The experts at the RSPB seabird center are a terrific help to experts and would-be birders alike. Whether you stay a few hours or a few days, don’t forget to take in the view from the unique “upside-down” lighthouse before you head back to the mainland. 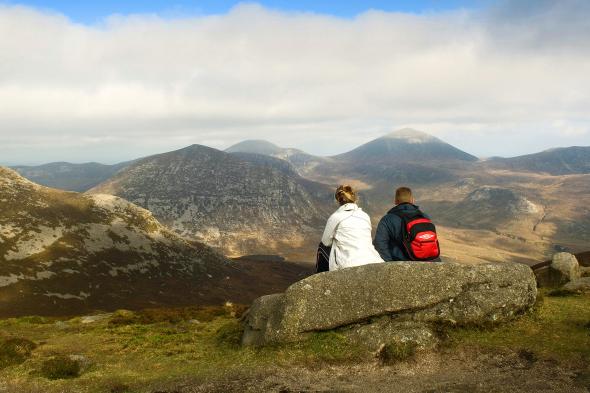 County Fermanagh may be landlocked, but the way to its heart is by water. Lough Erne, actually two connected lakes, is dotted with intriguing islands to explore. Devenish Island’s monastic site dates to the 6th century and its famed round tower was built in the 12th century. Curious ancient figures are found on White Island and on Boa Island where the two-faced Janus figure was carved by Celts circa 400 to 800 AD.

The local waters provide plenty of live action as well. The Erne system is famed for fine fishing of two distinct flavors; brown trout on Lower Lough Erne and pike on the Upper Lough. The lake’s scenic shorelines are home to a number of National Trust castle and great house properties. Celebrated inns, hotels, and restaurants serve up the culinary delights that are increasingly earning rave reviews in Fermanagh and across Northern Ireland.

The lake is friendly to paddlers with plenty of canoe and kayak rentals and a designated trail complete with camping. Non-paddlers can hop on a day cruise, or hire a boat and chart a course wherever they wish. If the lough only whets your appetite for more, consider moving on to the Shannon Erne Waterway. Thirty-nine miles of scenic canal, river and lake connect the lough with Ireland’s famed River Shannon—and hundreds more miles of adventure.