The best hotels near Edinburgh Castle

The best hotels near Edinburgh Castle, featuring the top places to stay for romantic restaurants, elegant rooms, cosy bars and stylish interiors, near Waverley Station and the Royal Mile

An imposing and historic building in the heart of the city, with a top restaurant and a new spa. It’s a modern take on the grand hotel: doormen in top hats, afternoon teas and women in furs alongside first-class connectivity, a fitness centre (with swimming pool and Guerlain spa) and impeccably refurbished rooms. Rooms come in four grades from ‘Classic’ to ‘Suites’, decorated in lightly soothing or softly stormy colours. Splash out on a ‘Castle View’ room for a heart-swelling outlook on life in Edinburgh.

The only five-star hotel on the Royal Mile, located between the George IV Bridge and the photogenic charms of Victoria Street. For a hotel with 167 rooms it feels remarkably personal, with graceful references to the past incorporated in the new Scottish designer-led revamp. Rooms come in ‘cosy’, ‘signature’, ‘superior’ and ‘deluxe’, all with iPod docks and Nespresso machines. It’s a five minute stroll up the Royal Mile to the castle from the G & V Hotel, where room 507 has a huge window framing a fabulous view of the castle.

The former Scotsman newspaper building turned five star hotel is a bastion of solid confidence and quiet style in a commanding position offering great views over the city. You can swim in the stainless steel pool, have a spa treatment, hang out in the North Bridge Brasserie or just gaze out over the city from your turret bedroom. If money is no object go for the penthouse and play Edinburgh Monopoly in your own library.

Located in Festival Square on the Lothian Road overlooking the west side of Edinburgh Castle, this modern hotel has everything you would expect from the brand, with bells on. Although predominantly aimed at business travellers, the location, range of rooms and services, luxurious spa and well-regarded restaurant make it the perfect choice for travellers who like to know exactly what they’re getting. There are 269 rooms in five categories, and these range from ‘Classic’ to ‘Grand Suite’, all with a look best described as well-tailored.

Located bang opposite Waverley Station and handy for everything, this German brand brings strong design to budget hotels, leaving everyone else playing catch-up. Here corporate means a house identity that is bold, distinctive and slightly bonkers. Rooms are pleasingly minimal – white walls and brand identity accents of turquoise and dark brown, book a front-facing room for views of the castle. Public areas are stylish, fun and functional; bedrooms are simple triumphs of good design using the house style with a lighter touch.

This city-centre hotel is not on the most salubrious-looking street in Edinburgh, but it’s in a central location close to the Grassmarket, with a great view of the imposing south side of the castle, and good restaurants nearby too. Although strongly corporate, the welcome is as genuinely warm as the complimentary cookie handed out on arrival, while the more stylish bar and restaurant areas make up for regimentally uniform but convincingly comfortable bedrooms.

This neo-Renaissance building with its massive clock tower has been an Edinburgh landmark for more than a century. With elegant bedrooms, the most expensive of which look out over Princes Street, the Castle and Arthur’s Seat, over-the-top marble bathrooms, a spa, gym and swimming pool and Number One restaurant (Michelin star holder for 13 years), as well as a brasserie, the Balmoral Bar and a dedicated whisky bar, this is a 21st century version of a grand hotel.

Edinburgh Castle is only a 10-minute walk from the newly refurbished George Hotel, where rooms at the side of the hotel have castle views. Bedrooms come in various sizes and styles from standard to suites (no bathrobes until you reach ‘deluxe’), but standard rooms are a good size, the ones in the old building with perhaps more character, but the new rooms are appealingly bright. A byword for comfort and unchanging standards for generations of visitors to Edinburgh, the hotel has managed to retain its essential character whilst managing to keep up with the times. 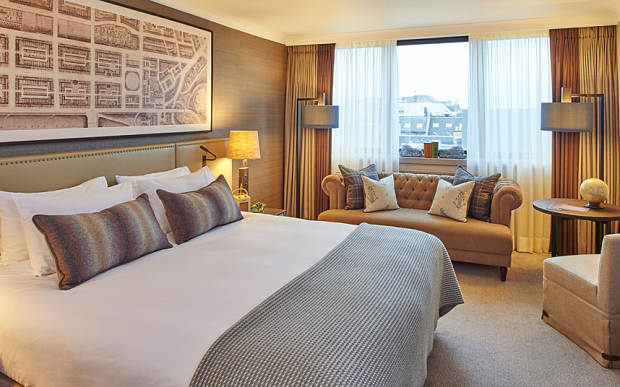