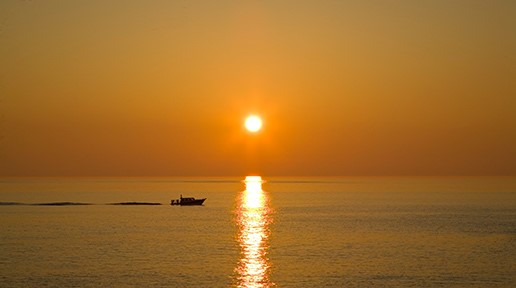 For the nature lovers among you Ireland offers unspoiled terrain, lavish green hills and a rugged landscape. Few locations rival the Emerald Isle when it comes to the great outdoors. 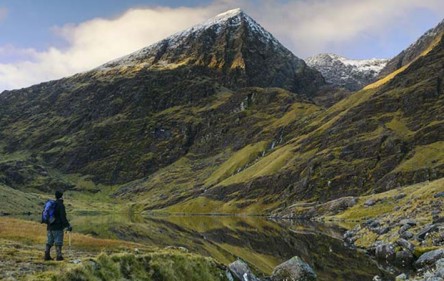 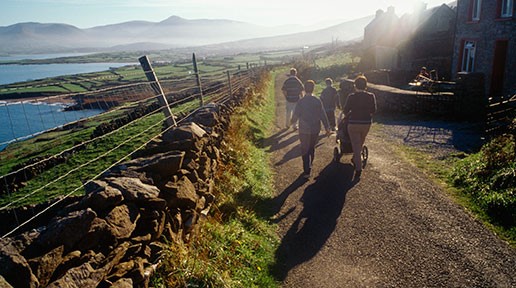 Caving in the Burren

The Burren is one of Ireland’s premiere cave attractions in Ireland. The word ‘burren’ translates into great rock which is precisely what this area is. It has been described as a limestone desert. There are almost one hundred megalithic tombs in this area, portal dolmens and a Celtic high cross. There are over 35 miles of cave passages here. The Ailiwee cave is the Burren’s most well known cave and is definitely worth a visit. Here visitors can sample great caverns, stalactites and subterranean rivers.

Glendalough which translates into ‘Glen of two lakes’ is one of Ireland’s first Medieval monastic settlements which dates back to the 6th century. Here in the spectacular glacial valley rock climbers can really appreciate the splendor of Mother Nature. Popular climbing sections include the Big Jane; Hobnail Buttress and the East Wing. The climbs vary between one and four pitches.

Whether you want to take a stroll up to Three Rock Mountain in Dublin or you are willing to attempt to conquer Croagh Patrick in Mayo, Ireland has mountains big and small that will satisfy any mountain climber. The views on offer are guaranteed to take your breath away. With over 390 mountains, there is no shortage of places to go.

With endless rivers and lakes there is no shortage of water for those of you interested in kayaking or canoeing in Ireland. The watershed provided by the Macgillicuddy Reeks in Co.Kerry is a popular destination for water enthusiasts. Coupled with hundreds of rivers and lakes spread throughout the country you are guaranteed to find several spots for the avid water lover. For those of you who prefer the ocean you should check out Blacksod and Broad Haven and Erris, Mayo.

If you have a competitive streak and want to mix the great outdoors with ducking and diving then paint balling in Ireland should be top of your list. The sport has increased in popularity in recent years with many Irish companies opening extensive adventure courses which include woodland, trenches and swamps all year round. From Actionpak paint balling in Kinsale Co. Cork to in to Elite paintballing in Dungarven Co. Waterford, there are over twenty venues throughout the country dedicated to the team sport.

Paragliding in Ireland is yet another way to sample the spectacular views that the country has on offer. For those of you who have been previously trained in this sport you should contact the the Irish National Association for the Sports of Hang Gliding, Paragliding, for more information on the best spots. They have offers in place for tourists who wish to get involved and also have many annual events to participate in.

Boating on the River Shannon

Ireland’s longest river is the perfect destination for long summer evenings. Not only do you get to sample the beauty of the winding path of Ireland’s rivers but this is also a very cost effective method of seeing the country. Tour operators offer a large variety of boats and guides on the best routes to take. Some operators offer interactive tours where you can pre-plan your desired route. When you dock in the many towns and villages along the way you will be exposed to the true taste of Irish hospitality.

With thousands of acres of woodland and forest Ireland offers some of the most intricate and challenging orienteering routes. There are 21 orienteering clubs throughout the country while many outdoor centers offer orienteering also. This is a great way to get to grips with the Irish landscape as you manoeuvre through the countryside while the clock ticks down.

Few outdoor experiences can rival the simplicity and beauty of a walking tour in Ireland. No matter where your trip to Ireland might take you, whether it’s Dublin City or the Dingle Peninsula, there are long and short walks all around Ireland surrounded by some of the most beautiful scenery in the world. Some of our favorites include The Wicklow way through Glendalough and Slieve Blooms which take in Co. Laois and Offaly.
Source

Located in Newcastle at the foothills of the Mountains of Mourne, Royal County Down enjoys a drier climate than the rest of the Emerald Isle.

The course has attracted many professionals. Tiger Woods and Tom Watson have played there for preparation for the Open Championships Rory McIlroy, Northern Ireland’s current star, often plays a round. Royal County Down will host The Irish Open in 2015.

The Canada Cup, The Walker Cup, and The Irish Open are just some of the championships that have been played at this course located outside of Dublin’s fair city. The practice facilities boast of a driving range, short game area, putting and chipping green, which are all at a championship standard.

The Royal Portrush, which is the only club in Ireland to have hosted The British Open, houses both the challenging Dunluce Links championship course and the lesser known but also challenging Valley Links course. The Dunluce Links were voted number 12 in the world by Golf Magazine.

Located in the south of Ireland, Waterville hosts a practice facility and short game area with fantastic views of the Atlantic Ocean and the surrounding hills. The practice facility is surrounded by hedge walls, which provide some relief from the winds which prolongs the playing season.

The Old Course features challenging holes nestled in grassy dunes and has been frequently rated among the top courses in the world. The Cashen Course on Co. Kerry’s shoreline is a more wild looking course with rolling dunes. 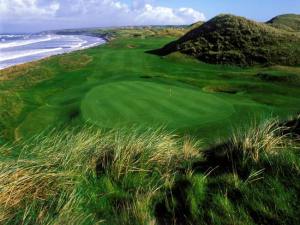 Called the “St. Andrews of Ireland” by Herbert Warren Wind, Lahinch features some two challenging courses and hosted the South of Ireland Championship. Also on the green are some goats that are descended from goats owned by an old Lahinch caddie.

The Tralee Golf Club was named to the Top 10 Ocean Courses with good reason. Each hole has a picturesque view and a story behind it. Designer Arnold Palmer said about the course, “I designed the first nine [holes] but surely God designed the back nine.” 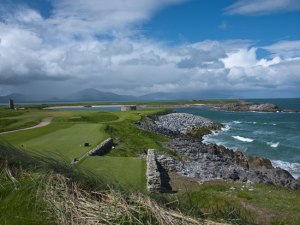 Arnold Palmer designed the two courses at this club located in the Kildare countryside. The courses provide plenty of challenges with water hazards, rolling fairways, and long greens. After a round of golf, guests can stay at the five star Kildare Hotel, Spa, & Country Club.

County Louth, sometimes called Baltray, has hosted both National and International events at the amateur and professional level. The natural beauty of the area combined with the strength of the course led “Golf World” magazine to call the course, “one of the best kept secrets of Irish golf.” 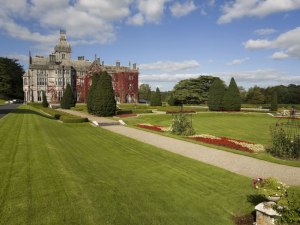 Robert Trent Jones, Sr’s masterpiece sits against the backdrop of the Adare Manor Hotel and Golf Resort. The 18 hole championship course features aquatic challenges of a 14 acre lake in the first nine holes and the River Maigue throughout the course. Adare is a short drive from Shannon Airport.