A deep dive into Irish DNA

EPIC Ireland is described as an interactive visitor experience celebrating the global journeys and influence of the Irish disapora.
Opening to the public on May 7 after an official launch by Mary Robinson, the attraction is set in the brick vaults of CHQ on Custom House Quay.

It is entirely privately funded, developed at a cost of €15 million by Neville Isdell, former Chairman and CEO of Coca Cola and member of the Irish diaspora.
On a preview tour, my experience was of a bold series of 20 galleries slickly fitted with at times breathtakingly immersive technology-driven displays.

Designed by Event Communications, the award-winning designers of Titanic Belfast, EPIC Ireland aspires to tell the story of “10 million journeys”, with galleries organised into themes of migration, motivation, influence and connection. 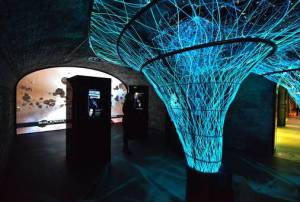 Why did people leave? What was their influence overseas? How has the emigrant experience changed over time? All are questions integral to the experience.

“The vision and objective of EPIC Ireland is to be the essential first port of call for visitors to Ireland,” said its Managing Director, Conal Harvey.
75pc of visitors are expected to come from overseas, with 25pc coming from the island of Ireland, according to Dervla O’Neill, its head of marketing.

She described the experience as “a real deep dive into the Irish DNA”.
Visitors receive a passport as they enter the attraction, stamping it at various points before using it to send a virtual postcard as their tour concludes.

Some 70 living characters are included among the galleries, ranging from Magdelene daughter Mari Steed to Graham Norton and President Barack Obama.

A rogues’ gallery evokes characters like Ned Kelly and Typhoid Mary, whilst others celebrate the achievements of scientists like Ernest Walton, musicians like Morrissey, and literary giants ranging from Bram Stoker to Edna O’Brien.

(…)
All told, however, this is a much-needed and extremely polished addition to Dublin’s deck of tourist attractions – at a time when the city is badly in need of new competitive edges to re-position a somewhat tiring image.
Source