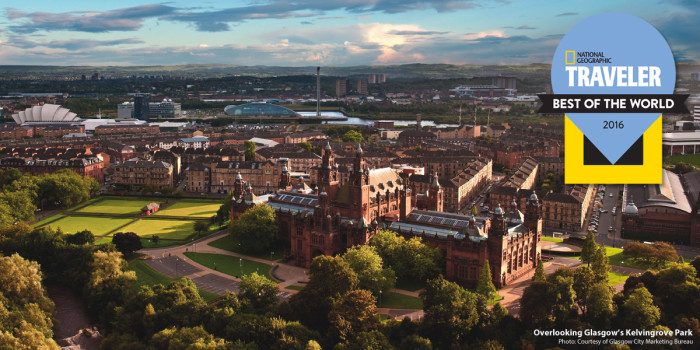 Amped Up With the Arts

If Edinburgh is the blue-blooded aunt at Scotland’s tea party, then Glasgow, just 45 miles to the west, is the T-shirt-clad cousin kicking over the kettle on the way out.

A wealthy shipbuilding and trade hub on the River Clyde since the 15th century, Scotland’s largest city fell into dereliction, earning a rough-and-tumble reputation that stuck to soot-covered buildings well into the 1980s. Now scrubbed up and gleaming, Glasgow flexes cultural muscle, artfully burnishing its industrial cityscape.

Scotland’s self-proclaimed Year of Innovation, Architecture, and Design kicks off in January, with Glaswegians proudly puffing their chests. The Turner Prize, Britain’s most esteemed contemporary art exhibition and award, is in Scotland for the first time, culminating on January 17 at Tramway, Glasgow’s former streetcar terminus.

But it is music that really pumps Glasgow’s cultural heart. From the bagpiper busking top-20 tunes along Buchanan Street to the crooner wooing crowds at storied clubs like King Tut’s Wah Wah Hut, Glasgow’s sound track is unrivaled.

“To describe a typical Glasgow musician is quite difficult to do,” says Stirling Gorman, who performs with his brother, Cha, in their band, King of Birds. “It’s really a Glasgow swagger that ties us together like twine.” —Kimberley Lovato

When to Go: March through May for the spring flowers; June to August for outdoor festivals and up to 17 hours of daylight; the New Year brings the Hogmanay and Burns Night festivals.

How to Get Around: From Glasgow Airport, take the First 500 Glasgow Shuttle to the city center. Walk and ride the subway to get around downtown and the West End. Use buses and trains to connect to outlying areas.

Where to Stay: Two buzzy, boutique options close to Glasgow Central train station are the 72-room Malmaison Glasgow and the 30-room Grasshoppers Hotel Glasgow. Malmaison, housed in a converted Greek Orthodox church (with a modern wing attached), is home to Scottish superchef Martin Wishart’s new brasserie, The Honours. At Grasshoppers, rates include sweet amenities like complimentary cupcakes and ice cream.

What to Eat or Drink: At Cail Bruich in the West End, the six-course tasting menu is worth the splurge. Selections are seasonally fresh, local, and homemade and could include savory smoked cheese gougères (pastry puffs) and mackerel prepared with plum, cucumber, elderflower, and buttermilk.

What to Buy: Get interior design inspiration at Timorous Beasties, the internationally acclaimed studio founded in 1990 by Glasgow School of Art alumni. Browse the collections of edgy textiles (such as iguana fabric, surreal Chic Blotch wallpaper, and Union Jackass lampshades). Smaller gift items include ceramic mugs and pillows.

What to Watch Before You Go: Glasgow native Peter Mullan won the Cannes best actor award for his title role in My Name Is Joe (Lionsgate, 1998), a gritty drama set and filmed in one of Glasgow’s poorest neighborhoods.

Fun Fact: One theory about the derivation of the name “Glasgow” is that it’s an anglicized version of the Gaelic descriptor glas cu (translated as “dear green place”). The city has 90 gardens and parks, including Victoria Park, where you can see remnants of an ancient swamp forest. The site, called Fossil Grove, protects 11 fossilized tree stumps estimated to be about 330 million years old.