The ‘Belmont Grand Hibernian’ anticipates its launch in summer 2016.

The train was announced after Belmond Ltd., a global collection of luxury hotel and travel adventures, acquired ten carriages from Irish Rail. It plans to transform them into a luxury sleeper train with accommodation for up to 40 guests over the next two years.

The ‘Orient Express’-style train will be the first luxury overnight rail experience of its kind in Ireland, with plans for tours of the countryside, coast and cities both north and south of the border.

Guests of Belmond, which also operates the legendary Venice Simplon-Orient-Express and Belmond Royal Scotsman, will travel in 20 elegant, en-suite cabins.

The ‘grand Hibernian’ will offer two, four and six-night rail experiences, with all-inclusive prices starting from €3,200.

Travel on-board “will be akin to a land cruise, offering daily excursions such as tours of historic estates, rounds of golf and visits to Titanic Belfast,” the company says. 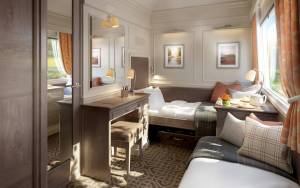 The train’s interiors will be designed by James Park Associates, who have worked on Belmond’s Eastern & Oriental Express. They will draw inspiration from Dublin’s classic Georgian architecture, adding a “contemporary twist” to Ireland’s ancient folklore and traditions.

Belmond Grand Hibernian will feature an Observation Car with a bar, contributing to what a PR representative terms a “country house party” atmosphere on-board.

There will be nightly entertainment, with local musicians and story tellers embracing the spirit of Ireland.

The train’s haulage services and Dublin depot facilities will be provided by Irish Rail.